Eight Factors To Consider Before You Decide to Move To Ronda

If you are considering a move to the Malaga area and want to live in a culturally rich environment, away from the expat life of the Costa del Sol, a move to Ronda is a great choice.

There is something about Ronda that awakens a passion in everyone that visits. Ernest Hemingway and Orson Welles both fell in love with the city. Perhaps it’s the fact that this city, full of life and vitality, is one of the oldest cities in Spain. Or that the ancient cobbled streets are lined with the most noble of houses.

When you look across the Serrania de Ronda from the ‘picture perfect’ puente viejo, you can appreciate Andalucía as it was, and as it is today. Plus you have stunning views to the countryscape from most spots around the city. In fact, you can walk into the countryside should you wish! 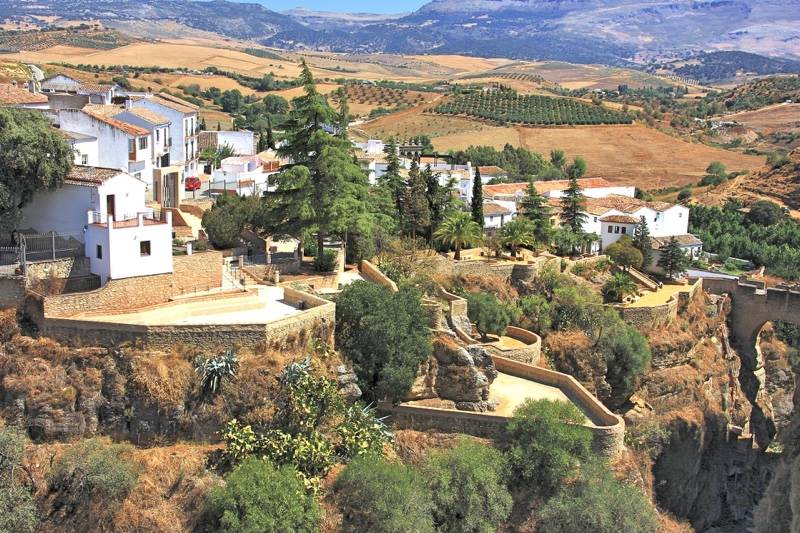 So, what factors should you be considering before you decide to move to Ronda?

Situated around 40-45 minutes / 50 kms from Marbella / San Pedro Alcantara and 100 kms from Malaga city and airport, the city is situated at the heart of the stunning Serrania de Ronda.

The road up to Ronda from San Pedro is long and winding, and if you get stuck behind slow moving vehicles, you can add another 20-30 minutes to the journey. Coming down is a little hairy, as you are on the drop side of the mountain. But the scenery is spectacular (passengers only of course!).

The Serrania de Ronda is dotted with gorgeous whitewashed villages, where you’ll find a happy mix of Spanish and expat residents. The blend works well here, with most expats choosing the location because they want to adapt and immerse themselves into the culture.

Property in Ronda city and the Serrania de Ronda is fairly priced, although as with everywhere in the Malaga province, don’t expect a bargain. Those days have long gone! You’ll get more for your Euro than you will on the coast and there is a mix of property options available. From purchasing an old town manor house to renovate to its former glory; a new chalet on the outskirts of town, or a village house in my favourite barrio (neighbourhood) of San Francisco.

YOU MAY ALSO LIKE TO READ  Searching For Your Perfect Property? I'd Advise You To Forget It And To Find Your Ideal Property in Malaga

Heading out into the countryside, you’ll find cortijos, farmhouses and cottages, renovated or to renovate. You choose. Be careful when purchasing inland, because the laws for building on rustic land are strict and you’ll need impartial advice on whether a property is legal or not, such as we can offer at Move to Malaga with our Property Finder Service.

Country properties can be built illegally and stand for years without being noticed. The minute they are under offer and paperwork is requested from the town hall, it can picked up on its illegality and it’s always the purchaser that suffers in this scenario. Imagine you fall in love with your dream home in Ronda, only to find out before signing that it isn’t to be.

Ronda is well connected by train to Málaga, Algeciras, Antequera and Granada, and also has a local line, which does a circuit of the villages of the Serrania de Ronda. Very handy for a day out!

There are buses to take you around town, and out to the city borders and suburbs. And a separate line that covers the villages of the Serrania de Ronda, Grazalema and inland Cadiz, although I can’t speak for the frequency or reliability of the out of town routes!

For day trippers, there are bus routes that will take you down to the coastal towns of Malaga, Torremolinos, Benalmadena, Fuengirola San Pedro Alcantara, Marbella and over to Cadiz. 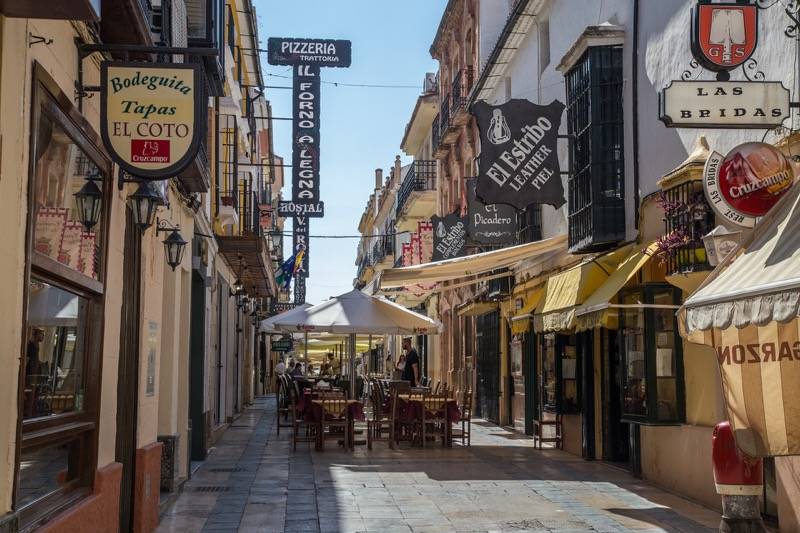 From the cheapest tapas you’ll ever enjoy, to Michelin star dining. Ronda has an eclectic culinary scene, with something for everyone. There is even a McDonalds for those that insist!

The centre of town can get filled with tourists, so as a resident you’ll probably want to avoid the centre during the high season, opting for local tapas bars and restaurants where you live. Outside of town you have typical ventas (country restaurants) which serve good hearty dishes, and the ‘menu del día’ (3 course menu) for between 7-10 € per person.

YOU MAY ALSO LIKE TO READ  Where’s the best place to buy a holiday home in Spain?

Last week I ate in the village of El Gastor, a 20 minute drive from Ronda, for 3.60 €! That was a hamburger and chips, tomato salad and a glass of wine. So good!

If you are a wine aficionado then welcome to your happy place. Ronda and the Málaga province have been producing wine for centuries, but in the last decade the wines of Ronda have been recognised for their high quality and deliciousness.

Ronda City and suburbs are well catered for in terms of amenities and shopping. All of the main supermarkets that you find on the coast, are also located in Ronda. In the smaller villages you will find smaller supermarkets, and independent traders, such as fruit and vegetable shops, butchers, bakers, etc. This is one of the joys of living in a rural environment, being able to buy fresh and from families that have been trading in the area for generations.

If you want more choice, then La Cañada shopping centre is just a 50 minute drive down and across to Marbella. 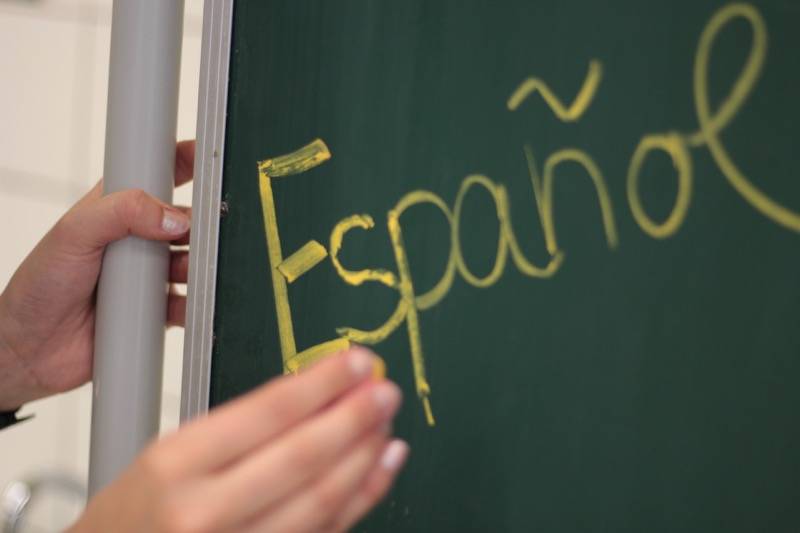 There are no International or British curriculum schools in Ronda. There are a couple of bilingual public schools – this means that some, not all, classes are taught in both English and Spanish. There are also private Spanish schools.

If you are moving to Ronda with small children then putting them in to a Spanish state school won’t be a problem, as they will very quickly pick up the language. However, once they get to the ages of 8 onwards, you have to think very carefully about sending your children – with no Spanish – to a state school, as it could be a struggle for them to catch up.

Although not as many on the coast, there are expats from all over the world living and working in Ronda city and throughout the villages of the Serrania de Ronda. It’s amazing to be sitting in a cafe in a tiny whitewashed village and hear a Dutch or British parent speaking to their child, who’s just finished school for the day. Your children won’t feel alone when they start school. But it’s important to consider their age. The older they are, the more important it is to give them a good grounding in the Spanish language before they start.

Choosing to live the Andalusian country lifestyle is one of the best decisions you can make for your family. There is far too much to do outdoors, for your kids to be stuck on computers, ipads or phones. Cycling, swimming, river routes and horse riding, are all part and parcel of living in the Serrania de Ronda. If you are living in town or in a village, each has its own outdoor municipal swimming pool, which is the daily meeting point for youngsters.

The Malaga province, including Ronda, has excellent facilities in every town for football, basketball and other sports hobbies. If you want to keep your kids active, then you couldn’t choose a better location. And of course within 40 minutes you can be on the beach, enjoying a day trip to the coast.

Ronda has an excellent hospital, which caters for the Serrania de Ronda and part of inland Cadiz. But most of the larger villages also have 24 clinics, dentists and doctors.

One thing I loved whilst staying in El Gastor recently was how the town hall – located in the centre of town, announces daily activities and the timetable for addressing different matters, over a loudspeaker, so that the whole village knows what’s going on!

If you want to purchase a property in Ronda, get in touch with us today. Our Property Finder team work with only the best agents in the Serrania de Ronda. We will save you hundreds of hours of surfing property sites, calling agencies – often with little English, and finding out about the different areas and villages.

I am happy for any excuse to head up to Ronda!

Take your first step in the right direction and  Contact Us Now!