If you are thinking about moving to the Los Boliches Fuengirola area of Málaga, read what local resident Ali Meehan has to say about the area …

Spain was never on my agenda until I met my (now) husband in the spring of 2002.  I was working from home in the UK for a company based in the Middle East so moving the operation to my Spanish home wasn’t so difficult.

Before I moved here, Fuengirola and the Costa del Sol had appeared to be an overpopulated location with a slight tarnished kiss-me-quick Margate feel.  However, since moving and living here, the Costa and Spain has so much to offer; I love Andalucía, the traditions, festivos, ferias and culture.

Living in Fuengirola initially and then moving to Los Boliches in 2003 gave me some insights into both Towns.  I’m very much a townie with a love of the sea so both places offer great places to live.

Los Boliches (its full name: Santa Fé de los Boliches) is one of the suburbs of Fuengirola (along with Torreblanca, Carvajal, El Boquetillo and Los Pacos).   It is on Fuengirola’s beachfront that extends 8kms.  For me, Los Boliches area starts and ends where the river inlets flow down from the mountains to the sea; on one side through the Feria Ground and the other at the river at Torreblanca.

Transport : The transport links are excellent, connecting Los Boliches with Malaga and the Renfe inter-Spain rail network and finishing at the end of the line in Fuengirola.  Trains run 3 per hour to and from Malaga/Fuengirola stopping at Los Boliches Train Station and there is also a good bus service to Torremolinos.  Fuengirola Bus Station (a 15 minute walk, bus, or train stop away) provides links on to Marbella, as well as connections to Europe through ALSA  It is also easy to get a bus direct from Los Boliches to Parque Miramar Shopping Centre.

Shopping:  Whilst Parque Miramar shopping centre and Fuengirola Town offer international brands, Los Boliches has lots of shops ranging from El Corte Ingles (opposite the train station) containing a SuperSol Supermarket, two Mercadona Supermarkets (one just the other side of the river) and Eroski Supermarket as well as the traditional small, still largely. Spanish family owned shops.

YOU MAY ALSO LIKE TO READ  Who Is Moving To Spain in 2018? Bring On Location Independent Living!

The town is moving with the times and population and contains shops, restaurants and bars for the large Scandinavian population and all other nationalities.  The original Market (Mercado Los Boliches) opens daily selling fruit, vegetables, meat and fish as well as a large Tuesday market in the Feria Ground selling everything from fresh produce from local farms to clothes, toys and homeware with a flea/second hand market on Saturday.  Unlike the UK, shops in Los Boliches close on Saturday lunchtime until Monday morning.

Entertainment and Leisure : With the Recinto Ferial (feria ground) on our doorstep, we enjoy lots of ferias and festivos. And I have to admit to being a bit of an addict.   The International Feria “La Feria de los Pueblos” takes place end of April, beginning of May and 6-12th October sees Fuengirola’s principal fair the Feria del Rosario. My favourite is 16th July – a celebration of the Patron of the Sea – Virgen del Carmen.  The Feria ground has 32 casetas that during the year are used by local clubs (peña) as their home.  From motorbikes, to football supporters clubs and political parties, these clubs also have different events taking place in their halls during the week.  We quite often hear the local band striking up a few notes and the click clack of tango. 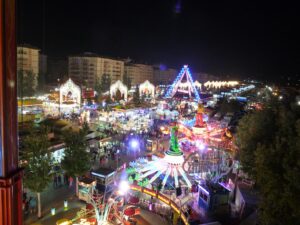 Gyms abound in Los Boliches (we must be a very fit town!)  Personally I use  Curves being it is part of an international chain of gyms.  There is also the large Alpha Fitness and down the side streets around Mercadona can be found many gyms along with the Ud Fuengirola Los Boliches Football Stadium. An indoor municipal swimming pool can be found at the end of the Feria Ground in Feria de Jerez

Dining: There are many good tapas bars and Restaurants in the town and outer area. I particularly like El Choco (mainly fish Restaurant), but be warned that there will be a queue to get in, especially during the summer. Our “local’ is Spanish “Bar Tango” down the side road by Hemingway’s Book Shop where a warm welcome is always forthcoming and free tapas provided with drinks.

And of course, we have the chiringuitos on the beach, most of which opening throughout the year.  You can still buy a café con leche in some cafes for 1€

Education:  Most of the schools can be found in Fuengirola, although Colegio Acapulco in Los Boliches has a very good reputation.  There is also  Instituto de Educación Secundaria Ies los Boliches  For smaller children the quirky  La Casita Martin in Pablo Romero has a good name too and houses a mini zoo. Scandinavian Residents have several private schools whether Finnish Centro Privado de Enseñanza Salliver and Escuela Finlandesa or Swedish Asociación Sueca de Enseñanza is in Avenida de Acapulco.

YOU MAY ALSO LIKE TO READ  Why Invest in Malaga Real Estate?

Learning Spanish can either be through Fuengirola’s Foreigner Department, or through the privately owned Language Schools in Los Boliches.  Academia Sur has been teaching Spanish for over 10 years

Health: Centro de salud Los Boliches is the main national health clinic in Los Boliches.  Be warned, they don’t always have translators available so take a Spanish-speaking friend with you.  We also have the private hospitals of Centro Médico USP just past the Feria Ground with Hospital Zanit in Fuengirola Centre

Property: Spanish families are still the biggest visitor during the summer, having holiday apartments and homes in the town.  In the winter, the town becomes home to the rental market of “snow birds”; foreigners who fly south to Spain to enjoy the warmer weather.

By far the largest amount of properties are apartment blocks in and around the town, although some of the old Spanish style houses, town Houses and villas are still in the back streets.  Due to the height of the apartment blocks, some great views can be had from their windows and with the majority being older in construction; the room sizes tend to be larger too.

Los Boliches now has a very international feel and if you are looking for somewhere slightly quieter, but with great transport links and walking distance to a large town, I think it’s perfect.

If you would like further information about moving to the Los Boliches, Fuengirola area of Malaga,  just Contact Us.