If you are thinking about moving to the Riogordo area of Málaga, read what local resident Pauline Lewis has to say about the area …

Following a brain haemorrhage in the summer of 2003 and a successful operation to stop the bleed, I decided to take early retirement from teaching and use my second chance at life living in a warmer country.  My husband and I had always thought we’d retire early and move abroad, so we flew over to Málaga the following spring and were taken to the Axarquía, an area within Málaga province.

We were shown several villages, finally deciding to have a villa built near a small village called Riogordo, up in the mountains.  We rented for over a year whilst our villa was being built, giving us a chance to explore Riogordo and the surrounding areas.  We have now lived in our villa for over seven years and love it!  Life in the village is peaceful and tranquil, but we are near enough to Málaga and the coast should we wish to hit the high spots!

Riogordo is a ‘pueblo blanco’, a ‘white village’.   These villages, typically Andalusian, are characterised by houses with whitewashed walls  and red or brown tiled roofs.

From our villa we look down over the village and can easily see the roof tiles, but back in January 2006 we had snow and couldn’t see the village as all the roofs were white! 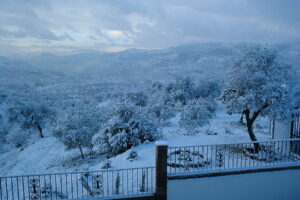 To its north lies a rugged area crowned by the Tajo de Gómer (cliff of Gómer), 1,129 metres, and the Sierra del Rey mountains.  Flowing through the village is the river La Cueva, but the village name comes, not from ‘rio gordo’ meaning ‘fat river’, but rather from the river being rich, i.e. fat, with minerals.  In days gone by, La Cueva was known as Rio Gordo or Rio de Oro (river of gold).  It is an agricultural region, with fields, mainly of olives and almonds, surrounding the village.  People from Riogordo are called Riogordeños, with the nickname ‘Panzones’, which means ‘pot-bellied’!

Its layout is Moorish, with remains of Phoenician and Roman settlements, with the first human settlement here being in the Neolithic Period, in the Tajo de Gómer area.

Because of its situation in the mountains, Riogordo is a hilly village, with the streets going up and down from the main square which is really the hub of the village, with the Town Hall, Police Station, Post Office, dentist, doctor, supermarkets, bakery, butchers, chemist, two banks and numerous bars.  It still amazes me to walk round and find a shop situated in someone’s front room!

There are two churches, Nuestra Señora de Gracia and the Ermita de San Sebastián, both dating from the 16th century.  There is also an Ethnographic Museum which has exhibits dating back four centuries showing tools, machinery and containers for grinding and collecting local wine and olives.  There are also rooms showing the inside of a house, one of the rooms representing a 17th century kitchen and another a 19th century bedroom.  There is also a sitting room, exhibiting items found in yesteryears…  Art exhibitions are also held here, so it is well worth visiting.

There are about 3,000 people living in the village and surrounding areas, with about 200 foreigners, mainly British.  We live in a new development outside the village, in ‘the campo’ as everyone calls it, but there are town houses and flats in the village.  There are many villas dotted around the campo, all with fantastic views of the surrounding fields and mountains.  I often say we live in one of the most beautiful places in the world.

We have a doctors’ surgery in the village and there is a 24 hour clinic in the nearby village of Colmenar.  There is a nursery school, infants’ and junior schools, with older pupils going to Periana or Comares by school bus.  Many British parents have told me how good the schools are at integrating the children, many of whom have little Spanish to begin with.  I envy the children I know who have been to school here and are totally bi-lingual…  although in Riogordo there are classes in Spanish for foreigners. These are free and well worth going to.  Currently there are two ability groups, beginners/intermediates and more advanced.

YOU MAY ALSO LIKE TO READ  Searching For Your Perfect Property? I'd Advise You To Forget It And To Find Your Ideal Property in Malaga

There are the usual village shops and pubs here, but for cinemas (some showing English language films), theatres, nightclubs, etc., you need to travel further.  Riogordo is situated about 33 kilometres  from Málaga in one direction and slightly more to the coast in another, so it is a quick journey to find different entertainment.

Every Easter, Riogordo stages a Passion Play – El Paso.  This production, which has about 500 locals in its cast, takes place on a hillside, a ‘natural theatre’,  in Riogordo, with performances on the afternoons of Good Friday and Easter Saturday.  There is seating for about 2,000 and people arrive from surrounding villages by the busload!    It is considered a festival of national tourist interest and has been performed annually since 1951.

Watch a You tube video about Riogordo here. 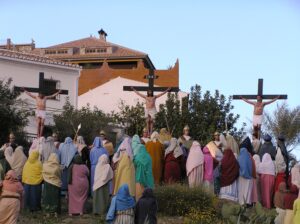 Also at Easter, villagers turn out in their hundreds to line the streets to watch the procession of floats go by.  Men from the village carry these floats, led by a man helping the men walk in step by banging a heavy rod on the road.

Other events include the fair which is held in August every year and the annual ‘Dia del Caracol’ – Day of the Snail.  There is also a weekly market.

The expat community here is small, so mostly we know each other.  We have a weekly quiz night in our village and there are many other quizzes held in neighbouring villages.  There is an expat club in Colmenar, our nearest village, and there is the Royal British Legion which has many groups in the Costa del Sol.  Going down to the coast, you would find choral groups, drama groups, social groups, all advertised widely in the many free English language magazines.  If you miss your English food there are many English shops in the Axarquía, with a branch of Iceland in Mijas, about an hour’s drive from Riogordo.  There are also many British-run pubs if you want to dine ‘British!

YOU MAY ALSO LIKE TO READ  How to find your ideal long term rental in Spain.

There are many differences to be found in life here in Spain – in Riogordo the Post Office is only open two hours a day and no post is delivered to people who live in the campo.  We have a post box on the outskirts of the village.  We also live too far from the village to have a mains telephone line, but there are companies which specialise in satellite phones and the internet.  We do not have dustmen collecting our rubbish, we have to take it to the communal bins which are emptied regularly – I think this is a very good idea as it saves having potentially smelly rubbish hanging around in the heat!

We have many herds of goats which wander round the campo and through the outskirts of the village.  We soon got to know Pepe, one of the goatherds, who often asks us for a top up of water for his flask as his goats chew merrily just below our property!  We also regularly see men riding around on donkeys, with their dogs either running alongside or standing up on the saddle…!!

Whatever the differences and difficulties we feel we made the right choice in moving to Spain and we have no regrets about leaving England.  We feel we are lucky to have found Riogordo and our urbanisation.  We have lovely neighbours, British and Spanish.  Our next door neighbours are Spanish, with a 17 month old son to whom I am ‘abuela inglesa’, English grandma.   They want me to only speak English to him so he can grow up bi-lingual.  I say he can help me with my Spanish!  His first word was ‘dog’, taught to him by his mum!!

We see our children and grandchildren often, although we are not often available for babysitting!

In conclusion, if you want somewhere to live that is peaceful and tranquil but is within easy reach of both the city of Malaga and the coast, you couldn’t do better than consider Riogordo…

If you would like further information about moving to the Riogordo area of Malaga,  just Contact Us.