If you are thinking about moving to the Ronda area of Málaga, read what local resident Claire Conway has to say about the area …

Claire Conway was born in the North West of England before moving to Ronda twelve years ago  at the young age of 20. She moved to Spain to improve her language skills and, after falling in love with Ronda and the Spanish way of life, she decided to move here permanently.

Claire started work in real estate and promotion companies immediately after moving to Ronda. It is here she built effective relationships with her clients, who all walked away with amazing properties at unbelievable prices. Claire has also been involved with building projects and project management schemes over the years.

Ronda, a small white city perched on the crest of a plateau in the mountains between Malaga and Sevilla, is also significantly off the beaten track and offers a quality of life the envy of coastal villages that have lost the independence of spirit and mindset still evident in Ronda.

As the largest of the ‘white villages’ of Andalucia, Ronda benefits from city status and the obvious infrastructural developments that come with it, yet is still unmistakeably a village itself, and it is here that family and a slower pace of life are still very much part of the makeup of the city.

Calle la Bola, a pedestrianised mall is joined to the Paseo de Hemingway near the bullring, and provides breathtaking views of the valley below Ronda and the mountains around the city, terminating in Alameda park, a popular central city area of tall trees and children’s play areas that resonates with the sounds of families enjoying themselves every evening and Sunday afternoons.

To describe Ronda one needs to be aware of her history, this is the city fought over for thousands of years for her impregnable defensive position. Archeologists in the area have identified a pattern of human existence in surrounding caves dating back as much as 60,000 years, and from the Phoenicians, Romans, Moors, and then the ascendency of the Spanish conquistador, Ronda has always been amongst the most important strategic locations.

However, Ronda is more than a defensive bulwark, she is also beautiful, being named the “Rose of the Grenadine Kingdom” during Moorish times, and described in poetry as the “soul of Andalucia” by Blas Infante the father of Andalucian patrimony as he unfurled the green and white flag of the nation, and it was here too that the great German poet Rilke wrote to his Empress in Vienna of Ronda as the “city of dreams”. 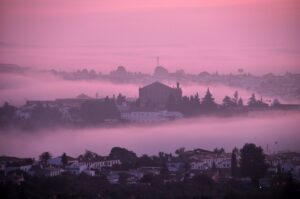 A mountain city, Ronda is surrounded to the south by the Sierra de las Nieves, and to the north by the Sierra de Cadiz which gives Ronda persistently cooler and less humid weather than the hot central cities of Sevilla and Cordoba, and at the same time a more pleasant temperament than the Costa del Sol where the sea air is often described as claustrophobic.

Winter in Ronda is also cooler, however day time temperatures below zero are very rare, in fact Ronda hasn’t experienced snow for a generation though the Sierra de las Nieves often have a snow cap making trips to play in the snow a favourite activity of Rondeños.

The highlight of the year however is always spring and autumn when the hills are alive with wild flowers, the chestnuts turn to orange, and mushrooms flourish along the river banks. February and March are spectacular, and whilst cool are favourite times of the year for walking.

Andalucia is the southern most community of Spain with several large important cities, the two biggest being Sevilla and Malaga. Ronda is roughly central being just over an hour from both, and with road and rail Andalucia’s other main cities of Cordoba, Granada, Jerez, and Cadiz are all within an easy two hour drive whilst Marbella and the Costa del Sol is less than an hour.

Three airports with regular flights to the UK are less than 90 minutes from Ronda, they being Malaga with two international terminals, and the smaller airports at Sevilla and Jerez de la Frontera. As well, Granada and Cordoba both have domestic airports.

YOU MAY ALSO LIKE TO READ  Riogordo, Inland Málaga

The rail system in Spain is excellent, the AVE high speed rail connects all main cities though Ronda is yet to be connected. Getting to Madrid requires changing at Santa Ana station outside Campillos, and runs direct to Madrid at nearly 300km per hour. 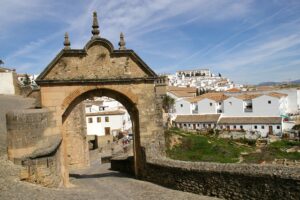 Ronda is a typical Andalusian town where major festivals are still celebrated, such as Semana Santa and the Romeria, two of the most important religious holidays in the annual calendar, but more than that, Ronda is unique in being home of the Spanish bullfight, and thus also celebrates unique occasions such as the Pedro Romero Feria and Corrida Goyesca where the bullfighters and a few chosen ladies dress in period costume reminiscent of Goya’s famous paintings.

Unlike more commercial holidays in bigger tourist cities, Ronda’s festivals are generally considered more authentic and intended for the townsfolk, meaning visitors quickly make new friends and are invited to join their neighbours or strangers as Rondeños take to the streets and eat local meats and cheeses, and drink tinto fino (sherry) whilst dancing sevillanas in rich flamenco dress.

Inland Andalucia offers a range of other activities, many of which involve nature activities including hiking in the mountains, cycling, horse-riding, hang-gliding, go carting, river walks, tapas tours, and if desired, golfing breaks to the coast.

Shopping in Ronda is an experience with most ‘tiendas’ being small family owned businesses, and the main street is a favourite destination of locals who still go for a paseo (evening stroll) every night, drink coffee or eat an ice-cream, and of course look out for their family and friends who are doing the same thing.

Exclusive shopping with some of the world’s most desirable brands are just a 45 minute drive at Puerto Banus and Marbella, though major shopping centres with large department stores, electrical and furniture shops, and garden centres are almost as close in Malaga and Sevilla. Ronda has the distinct advantage of smaller friendlier shopping without the hustle and bustle of a major centre, and never feeling isolated.

YOU MAY ALSO LIKE TO READ  What is IBI tax? Who pays it? Why and How?

In many ways Ronda is still a secret which is surprising given the number of artists, poets and celebrities who have chosen to live or holiday here, the most famous being Ernest Hemingway, Orson Welles, The Beatles, Madonna, Rod Stewart, David Cameron, and Michelle Obama. 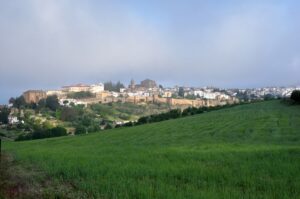 The city is small and filled with historic character, and the Serranía with charm and beauty, giving the appearance of the unspoilt Spain that elsewhere disappeared in the 1970s. Ronda is a quintessentially Spanish city exuding the aroma of bygone years. Poetry and art are still very much alive in the hearts and minds of the people in the Serranía, as is a strong love of their own culture which hasn’t been ruined by the influence of other cultures.

Property in the district is still underpriced given Ronda’s proximity to major centres, with many typical Andalucian cortijos (farmhouse) such as  This  exclusive beautiful  finca with its very own vineyard producing 9,000 bottles of wine a year. This luxury finca with padel court, large swimming pool, outside BBQ kitchen area, and out of this world landscaped gardens is situated in the heart of Andalucia within the pristine countryside of the mountainous district of Ronda. With 30,000 m2 of land privacy is assured, and the luxurious house of 1000 m2 allows for entertaining in comfort and style.

With so much available farmland near Ronda, buyers can still find excellent rural properties in the traditional style, which are one of a kind properties not found in the developed coast.

If you would like further information about moving to the Ronda area of Malaga,  just Contact Us.